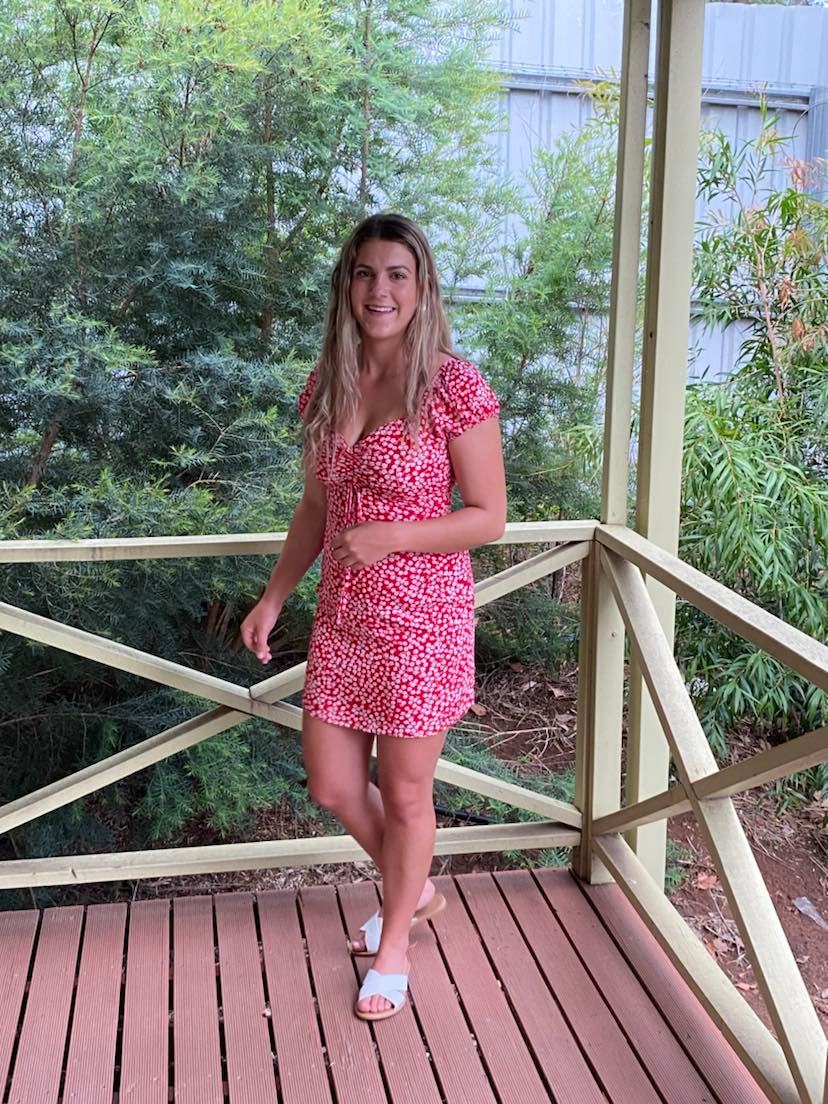 The President and Committee of the Dalgety Show is proud to announce Maddie Kirshner as our 2022 Young Women on the Year winner.

When Maddy Kirshner was told she had been selected as a representative for Dalgety Young Women 2022, she was delighted and eager to understand how she could share her knowledge and insights into growing up and living in a rural community.

Maddy grew up in Numbla Vale, approximately 15 minutes from Dalgety, a rural town located at the foothills of the NSW Snowy Mountains area on a mixed cattle and sheep farm.

Maddy attended Dalgety Public school from Kindergarten to year 6 and has always said this was the best school she attended. Throughout her time at Dalgety, the school enrolments varied between 6-28 kids. Maddy’s parents remember being asked why they would enrol their daughter in such a small school when they relocated from Sydney but Maddy thrived in this environment as well as making lifelong friends and growing up in a fantastic rural community. Maddy learnt many life skills along the way such as public speaking and being able to mix with all age groups and adults alike.

The school was like an extended family where parents involvement was welcomed and the kids, teachers and families all participated in the kids learning. They were able to experience many local excursions, from the coast to the mountains and almost everything in between during their time at Dalgety school.

Growing up in Dalgety also allowed Maddy to be part of the local pony club and she attended regular rally days as well as attending various pony club camps. Maddy and her dad also rode in loads of team penning events and these were great family events where kids through to grandparents all joined in the fun with camping weekends travelling all over the place.

Maddy also had the opportunity to learn to ski and was skiing from the age of 3, first with her parents and then as a member of the Thredbo St Moritz Ski Club and then Thredbo Ski Race Club. These were busy times!

When Maddy graduated Primary school, she choose the Christian school in Cooma where she attended from year 7 to year 10. During her time there, Maddy was awarded the “Pierre de Coubertin Award”, which is a prestigious award which recognises secondary school students who demonstrate values which are consistent with the Olympic Movement through participation in sporting activities. Again Maddy loved this school but it did not offer years 11 and 12.

Maddy applied for and obtained an equine scholarship to attend St Pauls College at Walla Walla as well as receiving a bursary from the Bush Children’s Educational Foundation to help cover expenses.

During year 11, Maddy was offered an opportunity to participate in the Young Endeavour Scheme. This scheme provides young Australians with a unique, challenging and inspirational experience with an 11 day voyage at sea, Now this was no holiday, it was hard work but an opportunity of a lifetime and Maddy was lucky enough to be able to explore the Whitsundays from Airlie Beach down to Gladstone as well as learning navigational skills. learning to work as part of a team, overcome her fear of heights, amongst many other things. This was an experience Maddy said she will never forget.

After the voyage, the Bush Children’s Education Foundation asked Maddy if she would attend a reception at the NSW Government House, where she had the pleasure in meeting the Governor, His Excellency General, The Honourable David Hurley AC, DSC (Ret’d) and his wife Mrs Linda Hurley and give a talk about her experience on the Young Endeavour as well as being a recipient of a bursary and how this helped with expenses and allowed her to attend the school of her choice during a very long drawn out drought period that effected rural Australia for many years of Maddy’s early life.

After graduating high school, Maddy received early entry to Charles Sturt University at Wagga Wagga to study Agricultural Business, although in the interim Maddy also obtained her real estate certificate so she would be able to assist in her parents rural real estate stock and station agency business. Maddy had been helping for many years at local clearing sales and assisting with client’s stock work but thought it would be a good idea to obtain extra credentials to assist with work options in the future.

Maddy also helped from a very early age with all the farm and stock work on her parent’s farm, including mustering, shed work whilst shearing was being done, drenching and vaccinating stock, calf and lamb marking, horse education and many more farm activities.

Maddy packed her bags and moved on campus to start life as a university student, although less than 4 weeks later she was back at home doing online study as that was the beginning of the Covid pandemic.

Although it was a set back to her plans, Maddy took this hurdle in her stride and moved back home to do online learning which she is continuing to do amongst many other things.

Life is busy for Maddy who has just turned 20 and she is thrilled to be the representative for Dalgety Young Women 2022 as she is passionate about all things rural and is looking forward to the challenge, and where this opportunity will lead her to next.

The Dalgety Young Women competition is open to females aged between 18 and under 25 years old as at 1 May 2022 who live or grew up in the former Snowy River Shire area.

Entrants must reside, be educated, or work within New South Wales for at least three months prior to their local Showgirl Competition to qualify to compete within the State.

The candidate judged to be the 2022 Dalgety Young Women will qualify for Zone Judging (in Cooma) Saturday 26th February 2022, and if successful will compete on a State level at the Royal Sydney Easter Show.

Entries for 2022 Showgirl have now closed.

History of the Young Women Competition

In 1962 twenty young female ambassadors entered the first Miss Showgirl competition, as it was originally known, with hopes of representing their region and working as ambassadors for women throughout rural New South Wales. Miss Margaret MacKay was awarded the title and a place in RAS history, even taking on a position as a RAS Councillor in 1997 along with her continued involvement as a Sydney Royal horse competition exhibitor, steward, judge and committee member.

Much like Margaret Mackay, today’s entrants continue their association with the RAS, through mentorships and taking on stewarding roles along with networking opportunities and professional experiences.

The competition has undergone a name change this year, with the new name reflecting the importance of the program along with its evolution. The young women entering today have great insight and knowledge of the issues faced in rural NSW, they are involved with their communities and are confident ambassadors. They are young women with purpose and ambition and ready to face the challenges and rewards offered by the agricultural show movement and deserving of the title The Land Sydney Royal Ag Shows Young Woman 2022 and the role of custodian and ambassador.

The competition plays a significant role in the development of rural women and boats incredible support from sponsors with over $40,000 in cash and prizes, another important progression from the $200 and silver tray won by Margaret Mackay in 1962.